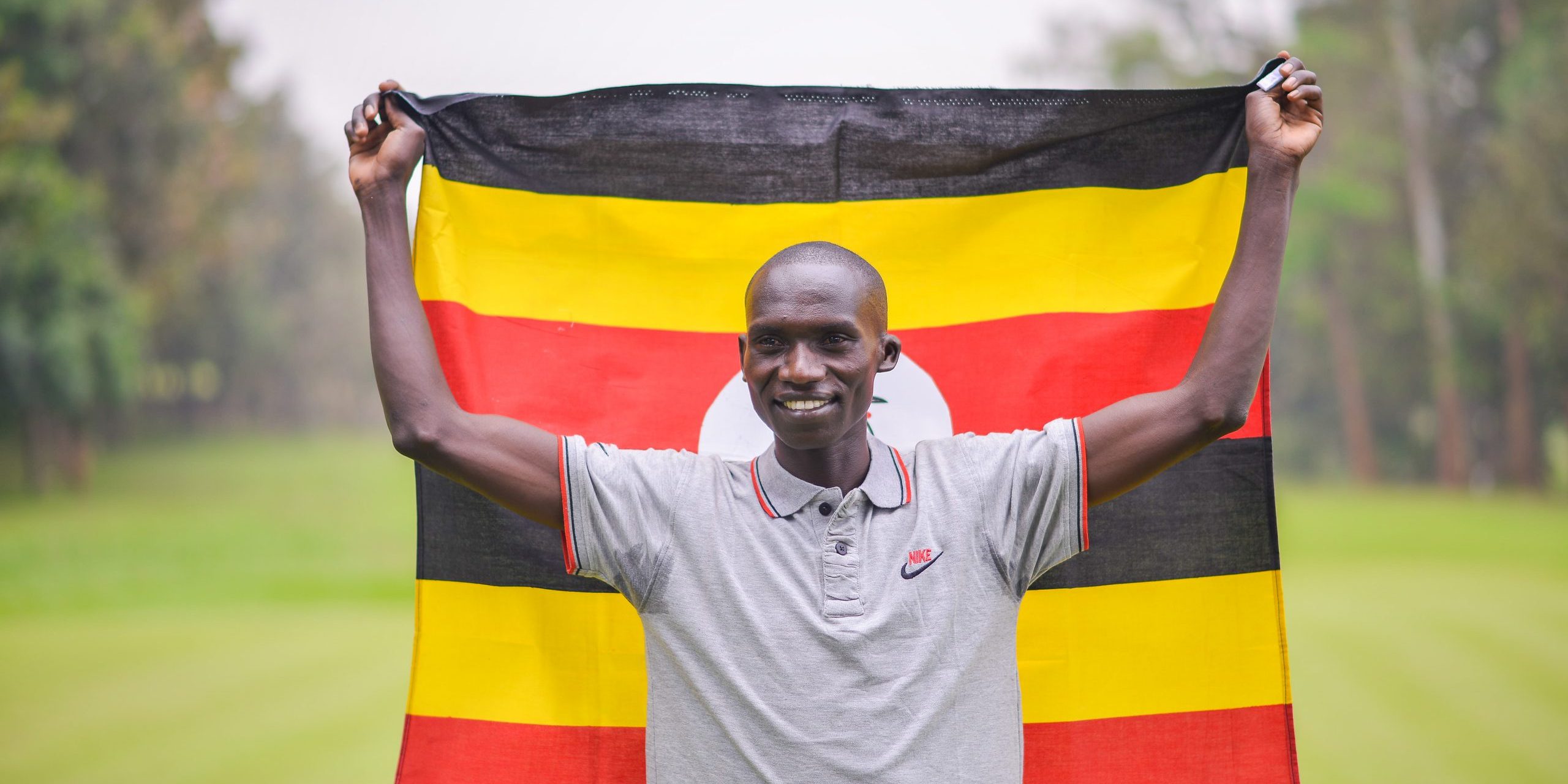 Ahead of expected recovery of the global tourism sector in late 2021 and beyond, Destination Uganda has kicked off a campaign to reposition herself as Africa’s most competitive destination for tourists and tourism investments.

Today, Destination Uganda has unveiled, its own Joshua Kiprui Cheptegei, the reigning World 10,000m Champion as its brand ambassador.

Uganda Tourism Board (UTB), the official Government of Uganda’s destination marketing organization for Destination Uganda, the Pearl of Africa and Joshua Kiprui Cheptegei have entered a one-year partnership that will “leverage Cheptegei’s global recognition and his love for his motherland” to “promote and market Uganda as a preferred destination for both domestic and international tourists and investors.”

“This is a mutually beneficial partnership, in which, UTB shall collaborate with Cheptegei and provide support towards his athletics activities at both the domestic and international level and in turn, earn his support and access to his platforms and networks to promote Destination Uganda,” said Ms. Lilly Ajarova, the UTB Chief Executive Officer.

Joshua Kiprui Cheptegei, a Ugandan, is the reigning world champion in the 10,000m category. He is also the current 8th overall top athlete in the IAAF’s men’s rankings. He is a member of the Netherlands-based NN Running Team, alongside other star athletes such as Kenya’s Eliud Kipchoge and Ethiopia’s Kenenisa Bekele.

Ms. Ajarova said that Mr. Cheptegei’s partnership with UTB, to promote Destination Uganda, also complements other ongoing initiatives, such as the ongoing Tourism Ambassadorship (2020/21) by award-winning artist, Eddy Kenzo, who was unveiled by the Ministry as the Tourism Ambassador in September 2020.

An honour and patriotic responsibility

Accepting the challenge, Cheptegei said he was more than honoured by the “huge responsibility, to be Destination Uganda’s ambassador.”

“It is a responsibility that I accept with all humility,” he said, adding: “It is both a challenge and a blessing.”

“Perhaps even more important, I am now even more motivated to give every race my all, because I know every win, is not just for me- but it is a win for every of the 700,000 Ugandans employed in the tourism sector, whose livelihoods have been put at stake by the Covid-19 pandemic,” he said.

Cheptegei urged Ugandans resident in Uganda and the diaspora to each devote time to promoting Destination Uganda, saying this will put more money into the pockets of Ugandans and improve livelihoods of especially women and the youths.

“Having been born and raised in the mountainous Kapchorwa district in the Sebei sub-region on the slopes of Mountain Elgon, close to the famous Sipi Falls, I am deeply aware of the impact of tourism on livelihoods, from the top to the very bottom of the chain. I know what tourism can do for the youth, women groups and even the uneducated,” he said.

“Much as Uganda is well endowed, it is not enough, if the world does not know about it. It is our responsibility as Ugandans to shout on top of the mountains and down in the valleys to everybody across the world such that we attract more and visitors,” he said.

Speaking at the unveiling, Col. Tom Butime, the Minister of Tourism, Wildlife and Antiquities, hailed the partnership with Mr. Cheptegei as a “vivid statement about our intentions to rebuild our tourism sector post Covid-19.”

“That we have chosen our own home-grown star talent to promote our uniqueness to the world, it couldn’t get any more authentic than that,” he said.

Col. Butime said the partnership with Cheptegei and other similar such initiatives to be unveiled in the year, were part of the Government’s big tourism push that would focus on increased investment in tourism infrastructure and massive marketing for the ‘Pearl of Africa’ brand to increase Uganda’s share of the tourism market in the region and on the continent.

He said that in Uganda’s National Development Plan III, the government has outlined 5 major strategic areas for investment, that amongst others, included, improving tourism infrastructure, enhancing airline connectivity to Uganda, as well as increasing Destination Uganda’s brand equity globally.

Regarding tourism infrastructure, he said that in addition to relaunching Uganda Airlines and the USD600m investment in 700km of tourism/oil roads in the tourism-rich Albertine region, government had also earmarked:

“All the above, are geared at increasing Uganda’s attractiveness as a preferred tourist destination. This will increase the number of tourists; the value of their spending and that will attract more investments that will create more jobs that will put more money in the pockets of all Ugandans,” Col. Butime said.

ABOUT UGANDA TOURISM BOARD (UTB)

Created by the Tourism Act (2008), Uganda Tourism Board (UTB) is the official Government of Uganda’s destination marketing organization for Destination Uganda, the Pearl of Africa. UTB exists to sustainably promote Uganda as the most preferred and competitive destination for tourists and tourism investments in Africa. By working with stakeholders in the tourism sector to market Destination Uganda while encouraging investment, education, training and research as well as developing and monitoring standards in the tourism sector, UTB has since its inception, 13 years ago, grown the number of tourist arrivals by 78% from 844,000 in 2008/09 to 1,500,000 in 2018/19. This is slightly above global growth rates of 63% in the same period. As a result, sector foreign exchange earnings have nearly tripled, growing by more than 171%, from US$590 million to US$1.6 billion in the same period. Today the tourism industry directly and indirectly creates 667,600 jobs, 77% of whom are youth aged18-30 years and accounts for 7.7% of GDP.

“Known as the “Pearl of Africa,” Uganda is located in East Africa and offers some of the continent’s most diverse wildlife viewing, dramatic landscapes, and immersive cultural experiences and warm people and hospitality. Uganda is home to more than half the world’s population of endangered mountain gorillas and trekking to observe these gentle giants in Bwindi Impenetrable Forest is one of the world’s top bucket list travel activities. Safari opportunities abound in savanna, forest, and wetland settings throughout 10 national parks, where visitors can come face to face with “The Big Five + 2 ” – lion, leopard, rhino, elephant, buffalo, chimpanzee and mountain gorilla– as well as giraffe, zebra, hippopotamus, crocodile, and more than half of all bird species found in Africa. Among Uganda’s extraordinary natural attractions are the snow-capped Rwenzori Mountains; expansive Lake Victoria, which forms the source of the Nile River; and Murchison Falls National Park. For more information, please visit; www.visituganda.com”

Uganda Tourism Board renews its focus on mountain tourism
December 28, 2020

Recent Posts
Go to Top
We use cookies on our website to give you the most relevant experience by remembering your preferences and repeat visits. By clicking “Accept All”, you consent to the use of ALL the cookies. However, you may visit "Cookie Settings" to provide a controlled consent.
Cookie SettingsAccept All
Manage consent

This website uses cookies to improve your experience while you navigate through the website. Out of these, the cookies that are categorized as necessary are stored on your browser as they are essential for the working of basic functionalities of the website. We also use third-party cookies that help us analyze and understand how you use this website. These cookies will be stored in your browser only with your consent. You also have the option to opt-out of these cookies. But opting out of some of these cookies may affect your browsing experience.
Necessary Always Enabled
Necessary cookies are absolutely essential for the website to function properly. These cookies ensure basic functionalities and security features of the website, anonymously.
Functional
Functional cookies help to perform certain functionalities like sharing the content of the website on social media platforms, collect feedbacks, and other third-party features.
Performance
Performance cookies are used to understand and analyze the key performance indexes of the website which helps in delivering a better user experience for the visitors.
Analytics
Analytical cookies are used to understand how visitors interact with the website. These cookies help provide information on metrics the number of visitors, bounce rate, traffic source, etc.
Advertisement
Advertisement cookies are used to provide visitors with relevant ads and marketing campaigns. These cookies track visitors across websites and collect information to provide customized ads.
Others
Other uncategorized cookies are those that are being analyzed and have not been classified into a category as yet.
SAVE & ACCEPT